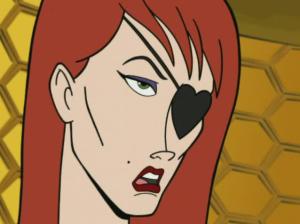 Molotov Cockteach is our sex therapist extrodinaire, guiding us through the jungle of dating, sex and general debauchery.

She’s a no-nonsense lady with strong opinions and thighs of steel. We don’t always follow her advice (especially when it involves leaving the couch) but we usually know that we should.

1) Are things like socks + sandals ok as deal breakers, even if it’s just a one night stand?

Definitely! No woman, or man, should have to endure the psychological aftermath of such a thing. Especially if the one night stand in particular is naked with ONLY socks + sandals. Punch him in the face for being insulted like that and run while there’s still time.

2) When is it ok to sleep with someone just because they look like a fictional character you fancy?

I don’t get it, why wouldn’t it be ok? I would do The Riddler any day of the week, even if he does look like one of the Weasley bros occasionally. This philosophy might not always be appropriate, but what the heck. It’s just sex. Fuck the Penguin if you feel like it, just don’t do it in public. Again, psychological aftermath. Brr!

3) What’s the best way to get rid of a hangover? Sex or food?

Food sex? Personally, I do it with a bottle of vodka, but I think the best order is to have sex, and then eat. And then feed each other, and have sex again. In the kitchen, while eating, perhaps?

4) Is bad to not sleep with people because they don’t resemble the fictional characters you fancy?

I sense a bit of a cartoon-hangup here. And no. Not if you don’t want to be one of the sad, sad people who sits at home with cats and a bottle of wine watching too much TV. If it’s so bad, get the first guy you see a mask and/or a costume of preferred fictional character and GET ON WITH IT!

5) I had one more question, but then I had sex, and I forgot it. Does sex cause memory loss?

No. Sex does not cause memory loss. The alcohol and drugs you took last night, that made you have sex, caused the memory loss. And trust me, you really don’t want to remember.

Send Molotov your own questions here!