I loved Sweet Valley High. I read all of them. I read Sweet Valley Kids, I read the special editions where they traced the family histories of selected characters, I watched the show- I was a major fan. Now, my beloved books are going to be turned into a movie, with none other than Ms. Diablo Cody behind the wheel.

A quick character recap: Jessica & Elizabeth Wakefield are twins, Jessica is the badass and Elizabeth is the nerd. Jessica’s BFF is Lila Fowler, who is super rich, super hot and super snotty. Elizabeth has her own BFF, equally (if not more so) nerdy Enid Rollins. While Jessica isn’t the type of girl to settle down, Elizabeth is and has an on-off boyfriend, the nice guy Todd Wilkins. Every town has a bad boy, and this one happens to be the rich and rebellious Bruce Patman. Another standard is a class clown, and Sweet Valley’s is Winston Egbert, the dorky yet sweet guy.  Sweet Valley Unlimited has a scary amount more information.

I miss the show, I looked up the Daniel twins to see what they are up to now.  Cynthia, who played Elizabeth, seems to have given up acting and is now a photographer.  Brittany however, is still acting. She’s been in a few screamers, worked with the Wayans brothers, but my favorite has got to be her role as Carmen, a transexual, who has a fling with Mac on It’s Always Sunny in Philadelphia:

If you feel that you are now ready for the movie, make sure by taking the SVH quiz.

I am personally waiting for this to turn into a trend, so that we’ll get a Baby-Sitters Club movie and a new Nancy Drew movie, where Nancy gets to be a badass sleuth instead of some wholesome know it all. Maybe she could move to the town of Neptune, have Veronica Mars as her sensei and give me some fucking closure. I would watch the shit out of those movies. And Goosebumps! I believe there was a show based on the books, but let’s get a summer blockbuster or a series of straight-to-DVD slashers.

And also, if Diablo Cody has some trouble deciding on who to cast, here is a helpful back-up plan:

Hand me my drink, darling

I got spectacularly drunk this weekend, which in my case means that all of my emotions got amplified and my hand gestures where very flamboyant. This prompted my boyfriend to rename me Joan Collins, and yes, from what I remember, I was Joan Collins drunk. What does that mean, do you ask?  Let me elaborate, and include some more types. I’m nice like that. 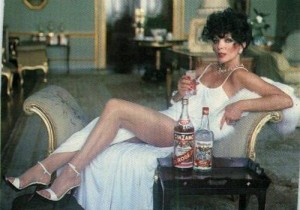 You will recognize a Joan Collins by his or her wild arm gestures and high volume. They will be very happy to be intoxicated, finding everything to be delightful and fabulous. And of course, they are completely unaware that they are this drunk, and telling them won’t do any good. There is always a risk that you will get a martini thrown in your face if they are angered. Just make sure they don’t smear their red lipstick, and everything will be fine. 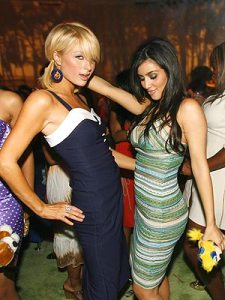 The It Girl Drunk will act like Britney circa 2007, or Lindsay Lohan after Mean Girls. They will feel entitled to everything, anything and anyone- so watch out. Material things are both vitally important and completely meaningless at the same time, which means they will laugh at your purse from last season, but they will not care when they spill/vomit/lose their designer shoes/purse/sunglasses/skirt. Also, they have a tendency to wear tights as pants. The horror.

This Drunk is very easy to spot because they might have cameras and cops following them, or are under the illusion that they do. They are probably also on crystal meth and may be wearing overalls or just a massive, stained t-shirt. 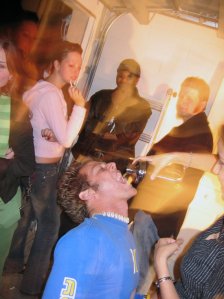 This Drunk is easy to spot because they will usually be covered in face/body paint or various fluids. They might also be chanting some sort of team spirit chant (I don’t even know), or claiming that their college “rules”. They will also probably sex, drink and eat anything or anyone for free or for beads. They also come equipped with disposable cups, beer bongs, ping pong rackets and the occasional STD. 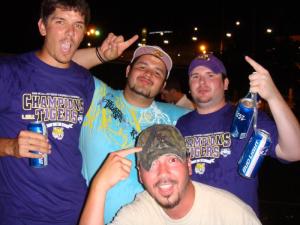 You will find the Sports Drunk in a venue showing some type of athletic game. Their mood can go from uncontrollable joy (their team is winning) to complete misery mixed with rage (their team is loosing). Punches are known to be thrown at the drop of a hat, so just watch your face and drink as much beer as you can.

This Drunk could be any one of us, as long as there is a phone (or Facebook or email) nearby and we have something or someone on our mind. There are very, very, very few times when this is a good idea. This Drunk should be avoided, whether you are turning into them or they are calling you up. Remember: you have NO obligation to return a drunk dial, that is the only good aspect of it. That and the endless mocking you are entitled to.